Nicholas Petrovic at Apogee Spirulina has been growing spirulina in two large greenhouses since 2015 using the small-scale French artisan method he learned in France. Interns from Santa Fe Community College work with Nic to grow, extrude, and dry spirulina into “sprinkles”, which are then packaged for sale. Shoppers can eat the sprinkles by adding them to smoothies, sprinkling atop salads, or enjoying them directly from the bag. 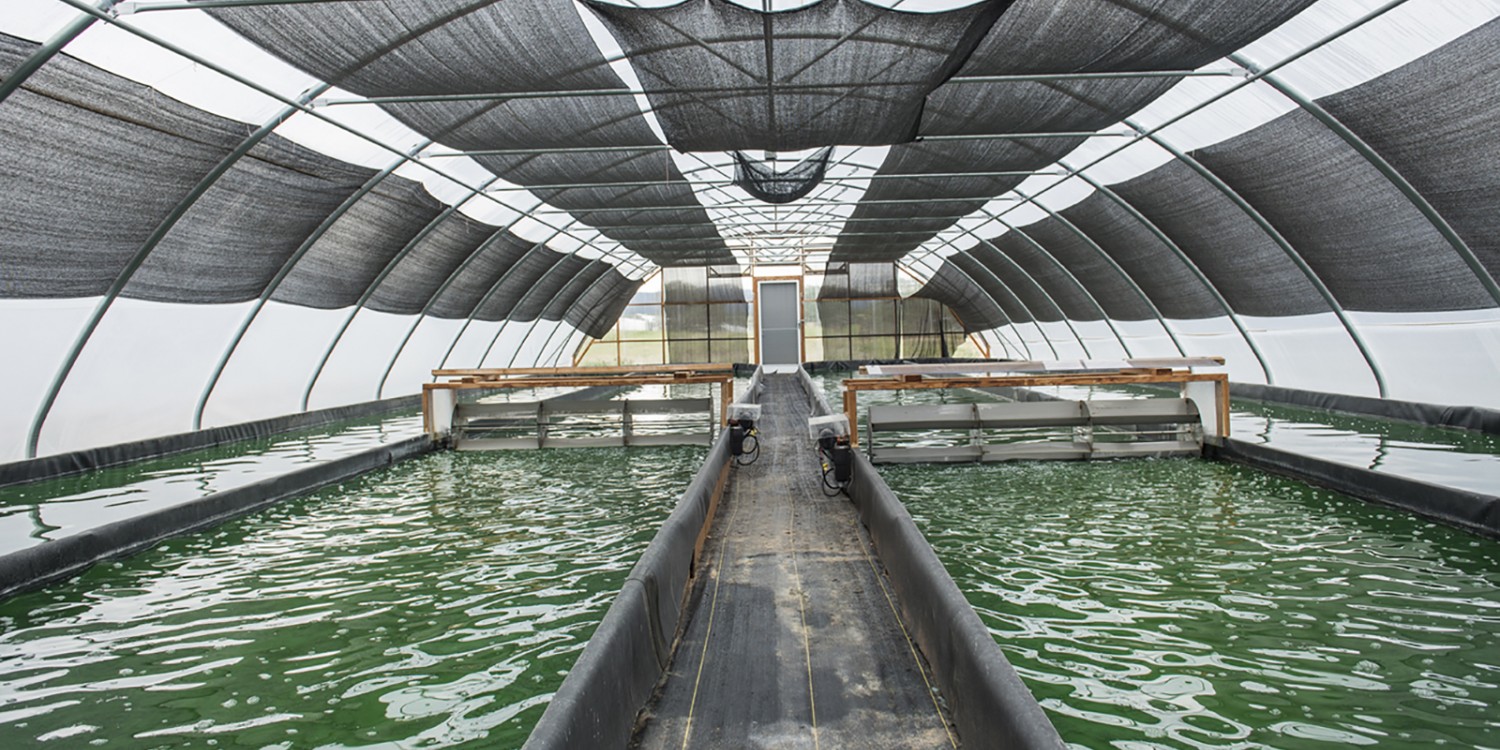 The green color comes from cultures of spirulina, or blue-green algae, which sometimes is mistaken for a plant. Spirulina was among the first organisms to use photosynthesis — meaning it converts atmospheric carbon dioxide into oxygen using the sun’s light. And not only is it edible, it’s packed with nutrients.

In fact, Apogee Spirulina calls it “our most ancient superfood.” Apogee is a pioneer — the first artisanal spirulina farm in the Southwestern U.S. Nicholas Petrovic founded Apogee in 2015. His product, which is dried and consumed raw as a nutritional supplement, is tasty, vegan and 100 percent natural.

Nic says that, despite spirulina’s many benefits, it wasn’t promoted commercially until the 1970s, in Mexico. In 1980, a United Nations group said that spirulina “will become an excellent food in the future,” and twelve years later, the World Health Organization called it “the most nutritionally complete source of food for the 21st century.”

Today, spirulina is cultivated worldwide, and the market for spirulina is expected to approach $240 million by 2022. It’s consumed as flakes, tablets and capsules and in powder form, and used for cosmetics, biofuels and other non-nutritional applications.

There are thousands of algae varieties, but spirulina thrives in both saltwater and freshwater, and in sunny, arid climates. Most is grown in large-scale outdoor ponds, but Nic uses the French Method — small-batch cultivation, in greenhouses, with all work done by hand. Santa Fe happens to offer an ideal environment for such artisanal spirulina farming. Nic learned the technique directly from a leading spirulina farmer in France.

Nic says that his greenhouses control evaporation and allow him to maintain a controlled temperature throughout the year. Also, the spirulina is protected from dust, pesticides and herbicides, which can blow across outdoor farms. Nic points out that Apogee’s spirulina is free of such contaminants.

Apogee’s prime growing season is from April to October. Most harvesting is done in July and August. Interns from Santa Fe Community College work with Nic to harvest the spirulina and filter it from its growing medium. He then dries it slowly in a solar oven.

Processing the drying spirulina is simple — Nic extrudes it through a grinder into long, coiled strands he likens to spaghetti. This process maximizes the spirulina’s surface area, which minimizes any loss of nutritional levels. Lastly, he breaks the strands into “sprinkles” and packages them for retail sale. The sprinkles, he says, are “easy to share, easy to spread around, easy to munch on, easy to add to just about anything.” 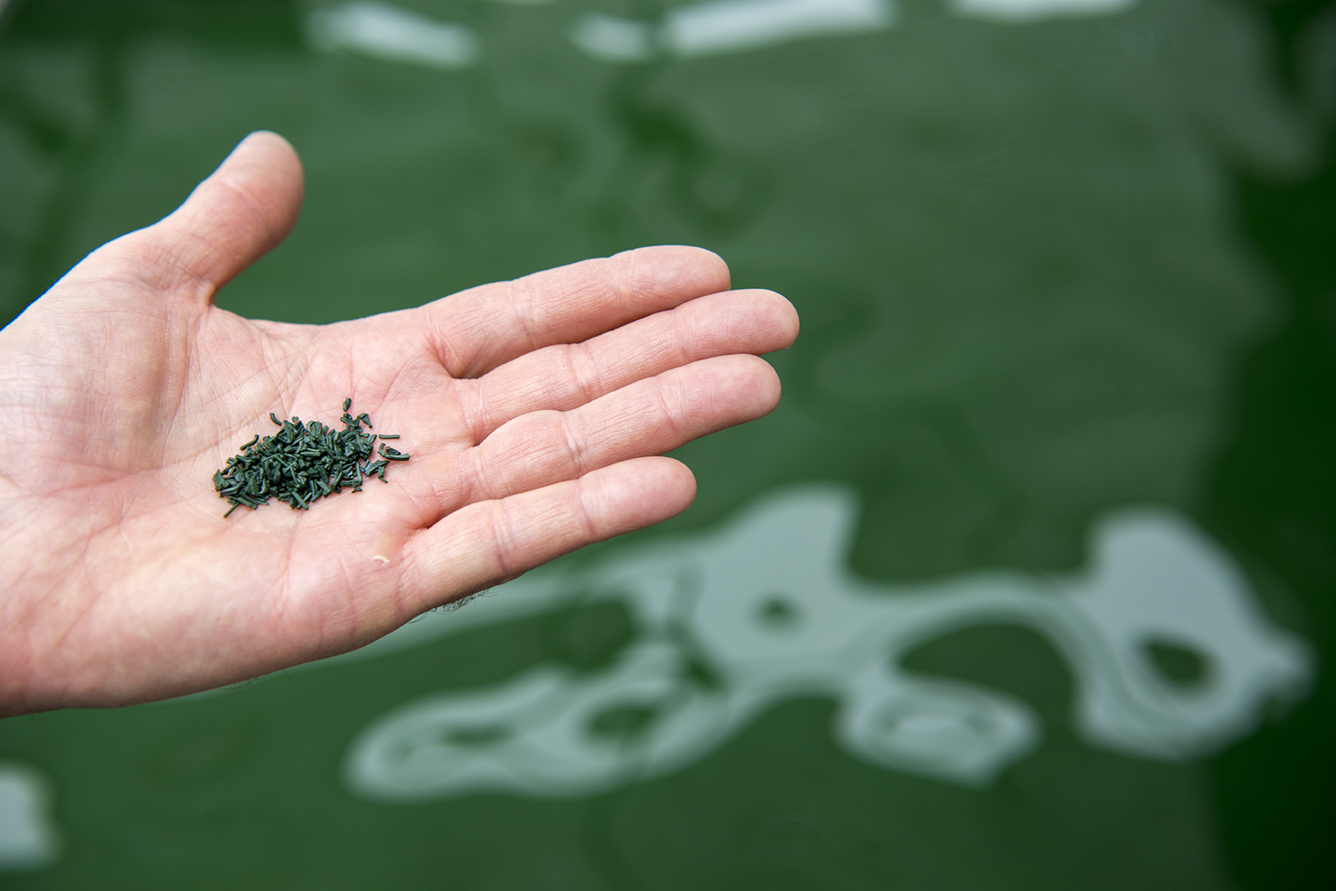 One tablespoon is a common serving of spirulina. It can be stirred into smoothies, spread over fresh foods like salads, or added to recipes.

Is spirulina right for you? It has a pleasantly savory or earthy taste, and it’s nutrient-dense. In particular, it’s exceptionally rich in protein — four grams are in every seven grams of spirulina. Apogee’s website notes that spirulina has “more beta carotene than carrots, more chlorophyll than wheatgrass and 50 times more iron than spinach.”

Vitamins B1, B2 and B3, plus copper, iron, magnesium, potassium, calcium, niacin, and manganese — they’re all in spirulina. It also contains every essential amino acid. And it’s a powerful antioxidant and anti-inflammatory agent.

Another remarkable fact about spirulina is that it binds with lead, mercury and other heavy metals. So it’s ideal for people on detox regimens. Many other possible benefits are listed on Apogee’s website.

As more people embrace spirulina, Nic’s operation is growing. He hopes to expand to six greenhouses in the future.

But profit really isn’t Nic’s motive. He’s a spirulina evangelist. He holds workshops to “share the love of spirulina,” and visitors from Africa, Australia and India have come to learn the method he learned in France.

As his website states, “our mission is to pass it forward.”